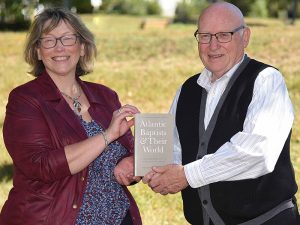 To celebrate and recognize Dr. Robert Wilson’s leadership and scholarship in the field of church history, Taylor Murray and Gordon Heath, two ADC alumni, spearheaded the creation of a Festschrift in his honour.

Entitled “Atlantic Baptists & Their World” and published by Acadia Divinity College within the Baptist Heritage in Atlantic Canada series, the Festschrift contains writings by a sample of the numerous people Dr. Wilson inspired throughout his career: former students, colleagues, fellow historians and associates in denominational life.

During the ADC Big Summer Stop on August 26, 2020, former ADC President Dr. Harry Gardner presented the Festschrift to Dr. Wilson, affectionately known to many as Dr. Bob, saying “It is a privilege to have written the forward to this collection of essays and to present to you this Festschrift that acknowledges your important contributions to the Atlantic Baptist community.”

The essays within the Festschrift are varied, encompassing profiles of Baptist leaders; discussions of Baptist theology and controversy; writings about Baptists and mission, society and conflict; a history of Baptists and the Black Nova Scotia experience; and an analysis of change and renewal among Atlantic Baptists over the past 50 years.

As Taylor Murray and Gordon Heath, editors of the Festschrift and former students Dr. Wilson, state in the introduction to the book, the writings “will be a testament to Wilson’s work as a professor, one who both trained young scholars and spurred on the study of Atlantic Baptist history to develop to the place it is today.” 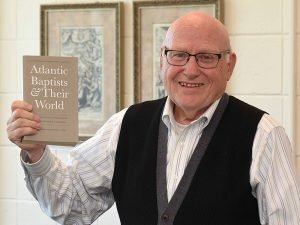 In a video tribute, those who contributed essays for the Festschrift congratulated Dr. Bob and spoke of their gratitude for his influence on the understanding of church history, his deep impact on the lives of his students over the years, his encouraging guidance and his inspiration as the model of a Christian scholar and church leader.

Dr. Wilson expressed his gratitude to all who created the Festschrift, and especially to the alumni. “Students were the most important aspect of our work. It was my joy to play a role in their education and I am so proud of what they have done.”

Dr. Robert Wilson, Professor Emeritus at Acadia Divinity College, served as the Thomas James Armstrong Memorial Senior Professor of Church History from 1991 until his retirement in 2018.

More Than a Degree: Reflections on Theological Education