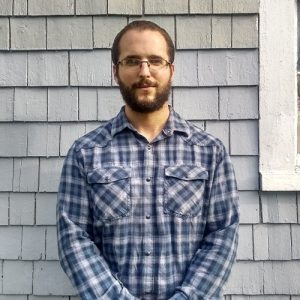 A graduating student of Acadia Divinity College has been awarded the Governor General’s Academic Gold Medal for Acadia University. John Ernst graduated in the spring of 2020 with a Master of Arts (Theology) degree. His thesis entitled “The Problem of Petitionary Prayer in the Early Christian Office” passed with distinction.

For more than 140 years, the Governor General’s Academic Medals have recognized the outstanding scholastic achievements of students in Canada. The gold medal is awarded annually to the student who achieves the highest academic standing at the graduate level[i].

“I am extremely grateful for this award,” Ernst said. “I certainly didn’t receive this award because there’s anything particularly special about me. Rather, I was uniquely positioned to receive the educational bounty of studying at both ADC and Acadia University. The greater part of any credit belongs with the faculty, those dedicated patient teachers.”

The MA (Theology) degree is Ernst’s second degree at Acadia. Both he and his wife Allison earned Bachelor of Theology (BTh) degrees in 2018. As part of the BTh program, students are required to take almost one-third of their courses outside the Faculty of Theology. “I was very fortunate to have the opportunity to study at both Acadia University and the Divinity College. Being part of the wider university community greatly contributed to my academic success. I simply could not have written the thesis I did within a purely seminary environment.”

Many factors influenced John’s choosing Acadia. “When I was looking for a school, Acadia began to stand out quite quickly. While its location close to my home in Lunenburg, Nova Scotia, was a factor in my choice, what really attracted to me to Acadia was the clear integration of pastoral and academic values of the school.”

Ernst has been accepted to Wycliffe College, the graduate theological school of the University of Toronto, to pursue a PhD. “The example set by my professors at ADC has inspired me to serve the Church through my academic work. They have set a high bar to continually integrate the academic pursuit with the needs of the local church.” Ernst will begin his studies from Nova Scotia this fall before relocating to Toronto with Allison and his young family.

Studying and Serving from a Distance