On Monday, May 27, 2019, Dr. Harry Gardner, President of Acadia Divinity College and Dean of Theology of Acadia University, officiated a Service of Naming and Dedication for

The event was held in the renewed College building boardroom and lobby, with 120 guests in attendance, including the Bartols’ four children. Other distinguished attendees were Dr. Peter J. Ricketts, Acadia’s 16th President and Vice-Chancellor, and Libby Burnham (Acadia ’60), past Acadia University Chancellor. 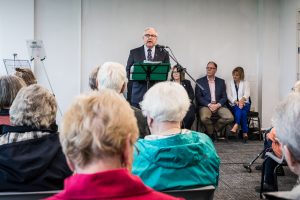 Before the official Act of Dedication, Dr. Gardner reflected on John and Carol and their commitment as “followers of Christ, lovers of His Church, and obedient servants to the Great Commission and the Great Commandment.” Dr. Gardner stated, “I can think of no couple who better represents the character of what will be needed in those who serve and who will make decisions in this place.”

A reception followed in the Garden Room of the K.C. Irving Environmental Science Centre where their son, Dr. Stephen Bartol, spoke of his parents, expanding upon the golden rule example set by them to do unto others more than they would have others do unto them. The boardroom was named following a generous gift made by Stephen and his wife, Judy, to establish an operating endowment to support the College. 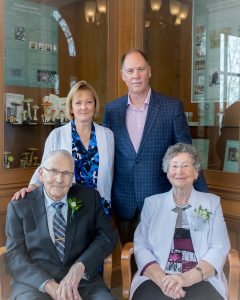 as alumni of the class of 1952.  John returned to his alma mater, serving as an original member of the Board of Trustees when the College was established in 1968. In 1990, John was welcomed back to receive an Acadia Doctor of Divinity (honoris causa). John has had a significant impact on the lives of many alumni of Acadia Divinity College, mentoring numerous Christian leaders before, during, and after their ordination.

Reflecting on the contributions of the Bartols, Dr. Gardner read a selection from the Foreword of John’s 1997 book, To Mark from Uncle Barnabas: Letters of Encouragement to Pastors and Church Leaders. The writer of the Foreword, late Rev. Dr. Andrew D. MacRae, the 4th Principal of Acadia Divinity College, said, “Part of the secret of the Bartols’ ministry has been the absence of self-promotion, and the willing adoption of the role of servant, so well learned from the One they have gladly served.”

The reception program ended with John expressing his deep gratitude to his family and his fondness for Acadia, declaring, “I believe Acadia Divinity College to be the best seminary in Canada!”