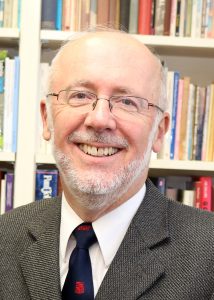 Born in St. John’s, Newfoundland, Edward is a two-time graduate of Acadia Divinity College, earning a Master of Religious Education in 1982 and a Master of Divinity in 1983. With more than 30 years of full-time pastoral ministry, he served three churches in Atlantic Canada and one in Ontario: Bromley Road Baptist Church, Ottawa, Ontario (1983-1986), Brooklyn and Liverpool Baptist Churches, Nova Scotia (1986-2001), and Grand Bay Baptist Church, New Brunswick (2001-2014). While living in Nova Scotia, he also volunteered as a member of the Executive of the ADC Alumni Association (1987-1991).

Edward is married to Beverly (Acadia Master of Religious Education 1983), and together they have two married children, Graeme and Andrea, and one grandson, Michael. He and Beverly make their home in Grand Bay-Westfield and are members of the Lancaster Baptist Church. He is a flutist and an active member of Saint Mary’s Band, a community based brass / reed band in Saint John, New Brunswick.

Edward will work closely with Rev. John Campbell, Director of Advancement, on a part-time basis to establish and maintain relationships with Acadia Divinity College’s donors as well as encourage them to prayerfully and financially support the College.