On 30 September 2020, Dr. Hannah Lane, Associate Professor of History, Mt. Allison University, delivered this year’s Rawlyk Lecture. Established in memory of the late Dr. George Rawlyk, the lecture series has traditionally brought to the Acadia campus noted scholars in the field of Canadian Baptist history. This year, our speaker “came” to us electronically, a first for the Acadia Centre for Baptist and Anabaptist History. Although very different from our traditional in-person lectures, this format did allow our lecture to be presented even in these difficult times and had the additional advantage of allowing many more people to “attend,” both that evening and since. 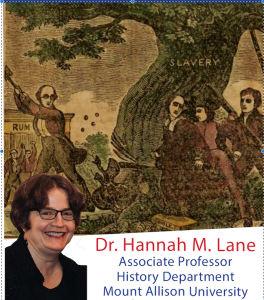 In a talk entitled “Church Conflict and Social Ethics in a Maine-New Brunswick Borderland Community,” Dr. Lane presented a fascinating insight into community/church conflict in the Calais, Maine/St. Stephen, New Brunswick area in the mid-nineteenth century. She examined the explosive issue of slavery and the ways in which the residents of these borderland communities dealt with the abolitionist movement. Feelings ran high and sometimes led not only to conflicting views within the Baptist, Methodist, and Congregationalist churches of the region but also to violence and arson.

Although Canadians tend sometimes to think of the abolitionist movement of the mid-nineteenth century as a largely American phenomenon, slavery having been abolished by then in the British Empire of which the Maritime colonies were apart, Lane’s work shows clearly how important, even passionate, an ethical/moral as well as religious issue it remained for many on this side of the American border as well. And certainly, there were defenders of slavery within the Baptist community of the Maritimes long after the period being discussed here.

We tend at times to give too much weight to the importance of lines drawn on maps – borders–, assuming that national, physical divisions also imply significant and meaningful social, religious and moral divisions as well. Dr. Lane’s paper is a strong reminder that community and church, and the inherent and attendant attitudes and values, often transcend such sometimes artificial divisions as national boundaries.

The interaction of Maritime Baptists and their counterparts in New England and especially Maine is a field rich with prospects. The exploration of the ways in which and the extent to which they influenced and shaped each other has been little explored to date. Dr. Lane’s fine paper contributes significantly to the building of a greater understanding of developments on both sides of the border, as the way in which many issues transcended and ignored that border completely. We are grateful to Dr. Lane for the valuable insights she provided.

Watch the replay of the lecture below and for more information on the Rawlyk Lectures click here. If you would like to stay updated, sign up for our E-Newsletter here.

The Julian Gwyn Prize in Baptist and Anabaptist History and Thought