On Monday, August 8, 2016, the Reverend Dr. Harry Gardner, President of Acadia Divinity College and the Dean of Theology of Acadia University, officiated at the Service of Dedication and Naming for

This event was in response to a memorial gift by Dr. Granville H. Nickerson, Sarah’s father, Acadia Class of 1942, and a native of Nova Scotia.

The memorial plaque, which will hang near the entrance to the Acadia Divinity College chapel, includes a childhood picture of Sarah, duplicated from an original portrait painted by the artist Madame Anna de Romer.  The plaque contains the following inscription:

The greatest of these is love.
1 Corinthians 13:13

Following the unveiling of the memorial plaque, the well-known hymn by Civilla D. Martin, 1905, His Eye is on the Sparrow, was played by Dr. Heather Price, School of Music, Acadia University.

The naming of the Chapel was witnessed by several members of the Nickerson family from British Columbia, Ontario, and Nova Scotia.

Also in attendance was Dr. Harold Mitton, the 3rd Principal of Acadia Divinity College, a fellow Acadia classmate and friend of Dr. Nickerson more than 70 years ago. During the luncheon that followed the ceremony, they reminisced about performing on the theatre stage together during their student days.

Greetings were shared by a number of attendees as well as notes from University Chancellor, Libby Burnham, and University Chaplain, Rev. Timothy McFarland:

I want to join the Acadia community in expressing thanks to Dr. Granville Nickerson for this generous contribution to Acadia Divinity College.  Dr. Nickerson has a long history of supporting our wonderful University, and his continued commitment is greatly appreciated. The Divinity College holds a prominent place in our history as well as on the present campus.
– Libby Burnham, Chancellor, Acadia University

I extend my gratitude to the Nickerson family on the lovely support for the chapel in my Alma Mater. As Dean of the Manning Memorial Chapel on Acadia University campus, I value the partnership the University and the College share as well as the mutuality in spiritual growth and maturity for who are part of Acadia.
– Rev. Timothy McFarland, Chaplain, Acadia University

Dr. Granville H. Nickerson was a dedicated Acadia student, earning the coveted Cox Cup and Medal for his outstanding record in intercollegiate athletics, other extracurricular activities, and scholarship.

Following his Bachelor of Arts at Acadia University, he attended medical school at McGill University, graduating with a medical degree in 1945, and a Diploma in Pediatrics in 1950.  He was named a Fellow of the Royal College of Physicians the following year. In 1951, he pioneered the successful treatment of children with tubercular meningitis, a previously fatal disease in children.

He had a distinguished career in pediatrics and education, including an appointment as Teaching Fellow at Harvard University and twenty-five years of continuous post-graduate teaching at McGill University.

He served as a physician at the Montréal Children’s Hospital, and was Pediatrician-in-Chief at the Royal Victoria Hospital for eleven years.  He was a consultant to the Montréal Neurological Institute and a part-time medical health officer to the Town of Mount Royal, where he initiated numerous valuable health programs.

Dr. Nickerson also devoted his energies to his country, his community, and his church.  He was a reserve member of the Royal Canadian Army Medical Corps (1944-1945) and a member of the Royal Canadian Navy Reserve (1950-1953), sailing on the HMCS Magnificent.  He served as a Councillor for the Town of Mount Royal, was an elder in United Churches of Canada (1968-1991), and sang in church choirs for more than 50 years.

The Nickerson Family Legacy of Giving

The Nickerson family began their relationship with Acadia nearly 90 years ago.

Dr. Nickerson’s late parents, Freda Edith (Cox) and Hubert Granville Nickerson, residents of Liverpool, Nova Scotia, gave to Acadia after the destructive fire of University Hall in 1926.  They were deeply moved by the appeal of Dr. Frederic Patterson, University President between 1923 and 1948.  At the time, they had $500 in their bank account, and Hubert gave it all to Dr. Patterson with this admonition,

“Who knows but someday I may have children attend Acadia.”

Eventually, four of their five children attended and graduated from Acadia over a period of 13 years:

Acadia Divinity College is deeply indebted to Dr. Granville Nickerson for his ongoing contributions to the training of Christian leaders.

In 1997, Dr. Nickerson and his late wife, Mary Louise, established a bursary through a trust fund in memory of his parents.  This bursary has supported more than 30 students, including four recent graduates who attended today’s special event: Evan Colford, Kayla Colford, Christoph Deutschmann, and Joseph Green.

Today, Dr. Nickerson gave another memorial gift of $250,000 to the College in memory of his daughter, Sarah.  This donation will help fund one of the College’s strategic priorities to refurbish the College building to keep it structurally sound and useful for future generations of students.

Dr. Gardner stated, “We will endeavour to prove ourselves worthy of the trust that has been placed in us.” 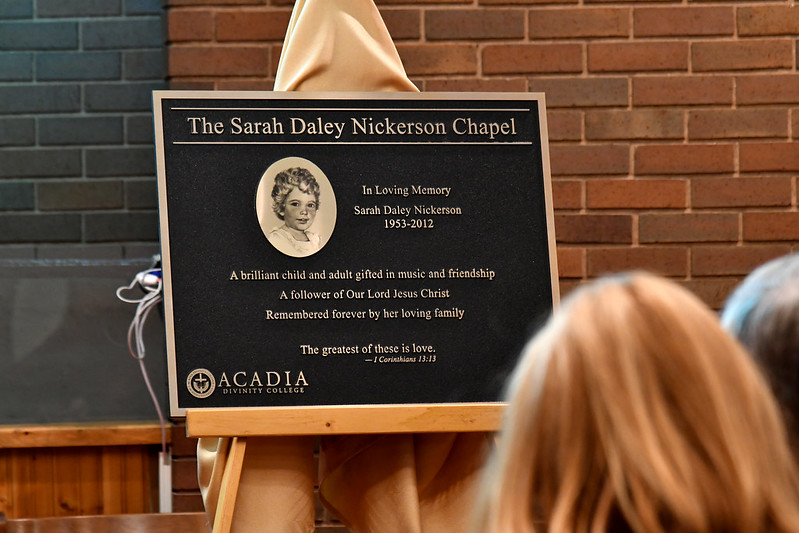