by Dr. Terry LeBlanc
Article originally published in the 2016 Summer Edition of the ADC Today 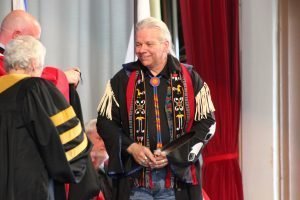 Dr. Terry LeBlanc receiving an honorary Doctor of Divinity from Acadia University in May 2015.

Indigenous scholar Taiaiake Alfred asks, What is “Indigenizing the academy?” To me, it means that we are working to change universities so that they become places where the values, principles, and modes of organization and behaviour of our people are respected in, and hopefully even integrated into, the larger system of structures and processes that make up the university itself.

From its very creation, the North American Institute for Indigenous Theological Studies (NAIITS) has been asking a similar question. Not just within the academic community, however, but also within the Indigenous and non-Indigenous evangelical Christian community.

In 1999, in response to the increasingly controversial issue of Christian mission and theology attuned to Indigenous culture, a small group of Indigenous evangelicals were prompted to explore ways to address the issue. Missionaries, theologians, and lay people had been struggling for many years to make sense of the issue to little effect. NAIITS was born in response to this inability of the church to fully include Indigenous North Americans in a manner that affirmed who their Creator had shaped them to be.

It was simultaneously a simple and complex problem: how to articulate a Christian faith in which Indigenous people’s culture was not further eroded or altogether decimated. Stated another way, “How could Indigenous people express their commitment to Jesus Christ and celebrate their God-given indigeneity within that faith without contradiction.  Finding little in print or experience that addressed the theological, biblical and missiological issues at hand, NAIITS determined to gather a group of people together to explore the issue of holistically contextualizing the gospel.

For the participants, in what has now become NAIITS: An Indigenous Learning Community, questions of culture and faith have been circulating for many years. Questions surrounding contextualization and the redemption of Indigenous North American culture in mission and ministry have surfaced through the many seasons of their lives. Most of the questions that drive the work of NAIITS flow directly from a community that has much invested in the answers.

The emergence of NAIITS is directly tied to the many years of labour invested by its board members in the Indigenous Christian community. From the day of its formation to the present, NAIITS has been an Indigenous North American led organization dedicated to introducing change into the education and practice of evangelical Christian mission and theology.

Believing that since the earliest period of colonization the Christian community had essentially written them (and their culture) out of the story of the church, NAIITS emphasized the inclusion of Indigenous worldviews, especially as they relate to training Indigenous people in theology, biblical studies, and mission. Since the North American evangelical church had become almost irrelevant to Indigenous peoples as a result of its unwillingness to make this change, NAIITS faculty and students were often left isolated from their own communities of faith in this endeavour.

NAIITS is unique in that its founding and management was, and continues to be, by Indigenous people. Prior to NAIITS there were few efforts in advanced theological education. Most that did emerge were birthed in the hearts and minds of the non-Indigenous community, delivered in a non-culturally inclusive way.

In the spring of 2014, Acadia University, through Acadia Divinity College, entered into a working agreement with NAIITS to begin delivery of a Master of Arts in Indigenous Community Development (MA-INCD). The first cohort of three students began that fall. The total enrolment for 2016 is four. This and four other partnerships with different institutions, delivering unique degree options, are the first partnerships of their kind delivered entirely by an Indigenous organization focused on higher theological education.

Since its conception in the late 1990s, and its organizational birth in the year 2001, NAIITS has become a well-recognized and well-respected group of Indigenous North American men and women dedicated to the advancement of Indigenous people’s education within the wider compass of those who follow the Jesus Way.

Since 2003, NAIITS partnerships have graduated seven people with doctoral degrees and nine people with Masters of Divinity or Masters of Arts degrees. Presently, NAIITS has five people in PhD programs (two at the dissertation stage) and one in a ThD program at the candidacy stage. Three of these students are enrolled in an ongoing program partnership created by NAIITS, two in a concluding agreement, and one in a single student arrangement.

In the twelve years that NAIITS has been engaged in the delivery of higher education, through its partnerships, we have graduated more students with advanced high-quality degrees than in the previous 150 years in the traditions of the church from which our membership has been drawn combined.

NAIITS believes Indigenous followers of Jesus have something of value to contribute to the Christian community as a whole in terms of mission and theology, but more particularly, that they need to create their own tools for mission to the Indigenous community.

Acadia is helping us make that point!

Dr. Terry LeBlanc, a Mi’kmaq-Acadian, is the Executive Director of Indigenous Pathways and also the founding Chair and current Director of the North American Institute for Indigenous Theological Studies (NAIITS), an indigenous learning community. Terry holds an interdisciplinary PhD from Asbury Theological Seminary, and specializes in Theology and Anthropology. In May 2015, Terry received an honorary Doctor of Divinity from Acadia University.